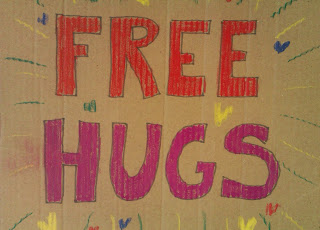 I didn't plan to write anything on this blog, but I went to a free hug event this weekend and it was such an incredible, exhilarating, freeing, moving, amazingly powerful experience that I feel the need to share a few lines.

In general, talking to strangers or hugging people – even those I've known for a long time and/or really really like – is not something that comes easily to me.  So I went to this event thinking it would be nice to give a smile to some people, but I was anticipating some awkwardness, at least at the beginning.

In spite of my good intentions, I was not sure of being able to give a true, warm hug to complete strangers who did nothing to a) deserve my sincere affection b) make me feel confortable enough to feel like demonstrating it. The plan was more or less to smile, put my arms around people, wait for a decent time and let them go. If not loved, I thought it would at least made them feel acknowledged and that it was already very positive. I thought that if I managed the physical part of the hug the whole operation would already be a success. Any genuine feelings on top of that would be a big bonus but it sounded a bit over optimistic to my own ears.

Big surprise. I discovered that there is no such thing as a mechanical hug. As soon as you open your arms, affection starts flowing on its own. You don't need to think or try. It just happens, for no reason, and it's incredibly great. Who people are doesn't matter. As if you had this unconditional love for humanity in here from the beginning, and you just gave it an opportunity to express itself.

I know it sounds a bit corny :) Maybe you know exactly what I mean. Or maybe you want to try and see for yourself, and you'd be darn right.

Because it's quite something, seeing some people running towards you, arms opened, some passing by a few times before approaching a bit embarrassed, some screaming with joy and enthusiasm, some laughing, some nervous, some jumping, some old, some young, some touching you so softly that you almost don't feel it, some strongly pressing you against their chest, some decidedly walking to one particular hugger as if on a sacred mission, some theatrically getting a massive group hug.. and all of them sending their good thank you vibes without even realizing that they gave everything back right away.

Seriously, it's like a reflection of how amazing each person can be in his/her own way.

It also reminds me of a quote I had for inspiration above my student desk for years. In substance, it was saying that you should treat every stranger as if he was a friend, with the same compassion and consideration. Only this behavior would enable the two of you to open up to each other and share something valuable. 'If things go wrong, it's always time to adjust your attitude later on' said the note, but your first move should be a friendly one.

The faith in - and love for - humanity it implies already moved me back then. Only now do I see how easily it can be implemented.

But don't trust me blindly, try it! - in particular if you suffer from shyness or social anxiety. You'll soon discover that there's much more love in people – including in yourself – than you ever suspected. And love leaves no room for fear.


- ADDENDUM: If you want to participate, Focal Local organises monthly free hugs event in London but also many more opportunities to have fun and get the community together. You can have a look on their website, Facebook page or Twitter -
Publié par Unknown